The popular foodie “Foodgod” has created a NEW amazing dessert that will be served exclusively at TGI Fridays starting on March 17th!

This delicious treat was even featured on The Wendy Williams Show! Check it out….

Congrats to Lynchburg and Madison Flugga!

Posted on: November 12th, 2019 by sarasiskin No Comments

Congrats to Madison Flugga, one of our dedicated & talented bartenders at our Lynchburg, VA TGI Fridays!

United Vice President of Operations Louis Quartochi stopped by the Lynchburg location to recognize the great work they’ve been doing, and he wrote this to share his excitement….

“I stopped in our Lynchburg, VA restaurant yesterday to check in on the team and had the opportunity to see Madison Flugga, one of our bartenders delivering a true ‘Corner Bar’ experience to a group of regulars. As the group was leaving, they made it clear she was ‘tops’ and she was the reason they are loyal regulars! I recognized her with a Vice President’s Gold Star and a bit of $$ to simply say Thank You for all that she does on a daily basis!!!!” – Louis Quartochi, Vice President of United Restaurant Group.

Keep up the good work team Madison (and team Lynchburg) – you make us proud!

Congratulations our General Manager at the Garner, NC TGI Fridays, Tara Scarborough for delivering phenomenal sales growth in 2018! Tara and her team were up a whopping 6.2% in comp sales for the year. Well ahead of the company and industry averages! She was recently presented with a Vice President of Operations Gold Star.

Also, congratulations to Thomas Miles, our Director of Operations in North Caroline & Virginia, for also delivering great comp sales growth in his market this past year. Thomas’ region was up 1.9% in comp sales!

Congrats to both amazing team members. Keep up the great work, Fridays All-Stars! 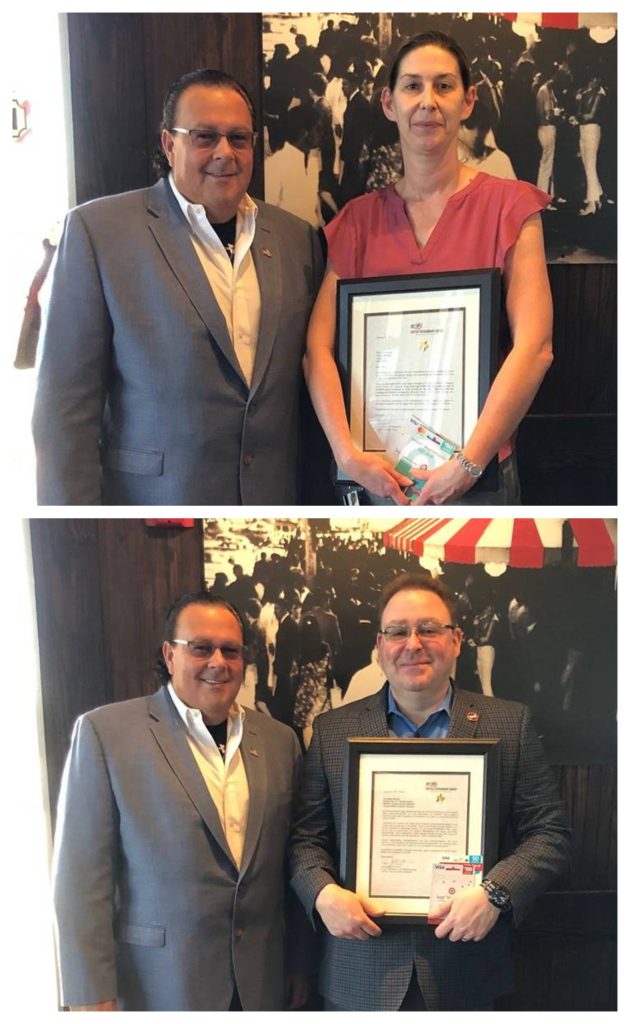 Congrats to Bonnie for 20 years at Fridays!

January 2019– we’re so proud to honor Bonnie Taluto on her 20-year anniversary at our TGI Fridays in Newport News. She’s always made such a positive impact on so many managers and team members over the last 20 year, and she’s always done so with a big smile.

Congratulations again Bonnie, and thank you for all you do for us! Keep up the great work! 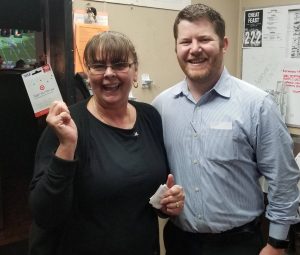 Congrats to Jake Kirchner – Franchise GM of the Year!

“I’m proud to announce that Jake was presented with the “Franchise GM of the Year” Award today by the folks from Fridays in Dallas. We could not be prouder of what Jake and his Asheville, NC team accomplished in 2017. Along with a hardy handshake, he also received a very cool crystal award and a very Beautiful Rolex Watch! The photos below tell the story!! Congratulations Jake!!!!”
– Louis Quartochi
Vice President of Operations 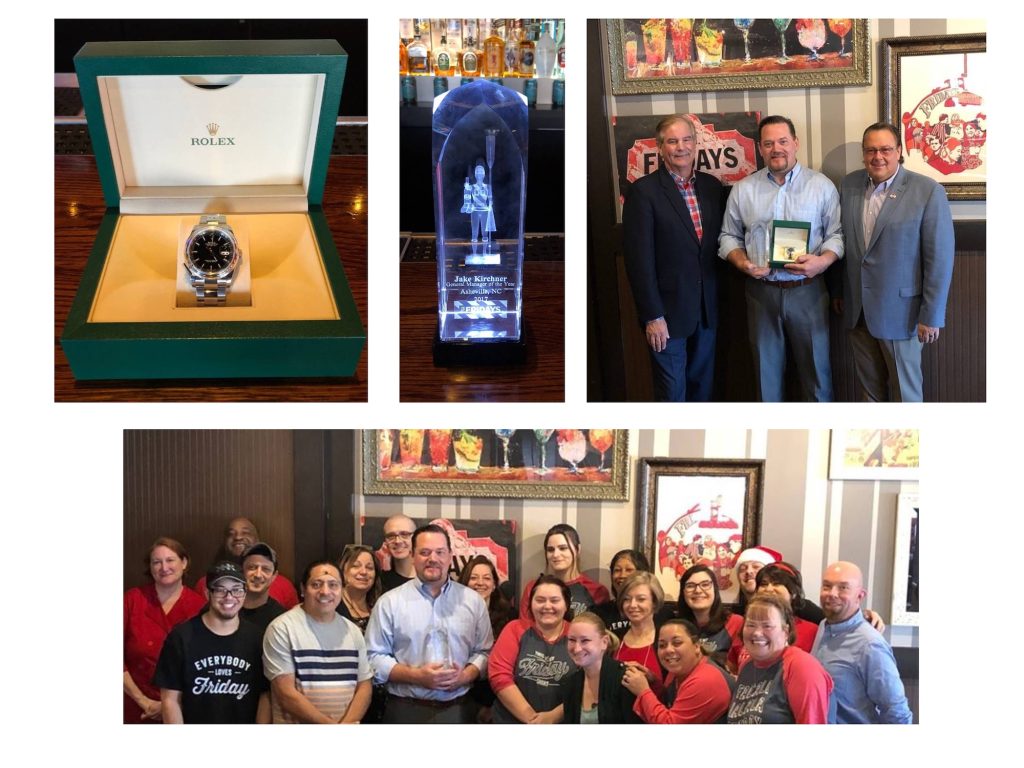 We’re so proud to be one of the sponsors of Z104’s Stuff The Bus this holiday season in VA Beach, Virginia. It was an amazing turnout! 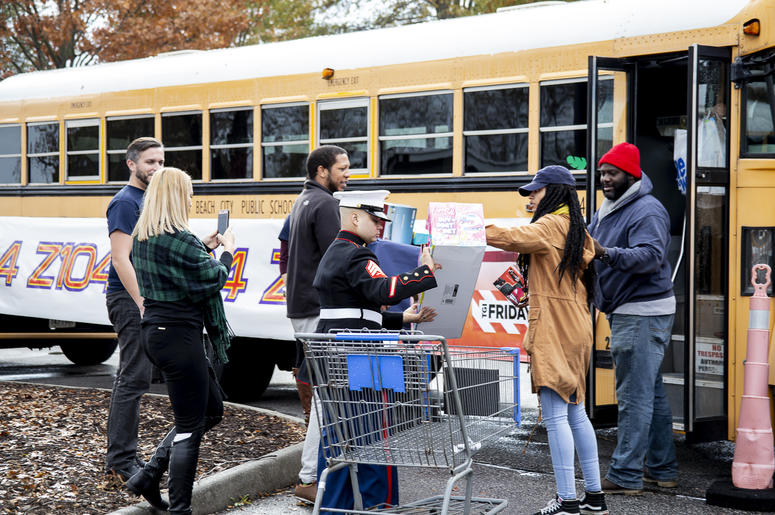 From the United Restaurant Group family- we are excited & proud to wish a very big GOOD LUCK to our friends competing at the Semi-Final Bartender Championship, located at our West Broad TGI Fridays in Richmond. Good luck to Jermie from Mt. Pleasant to Brittany, from Midlothian/Swift Creek, and also to Ali, from our Raleigh Fridays. Happy flair-ing ya’ll! 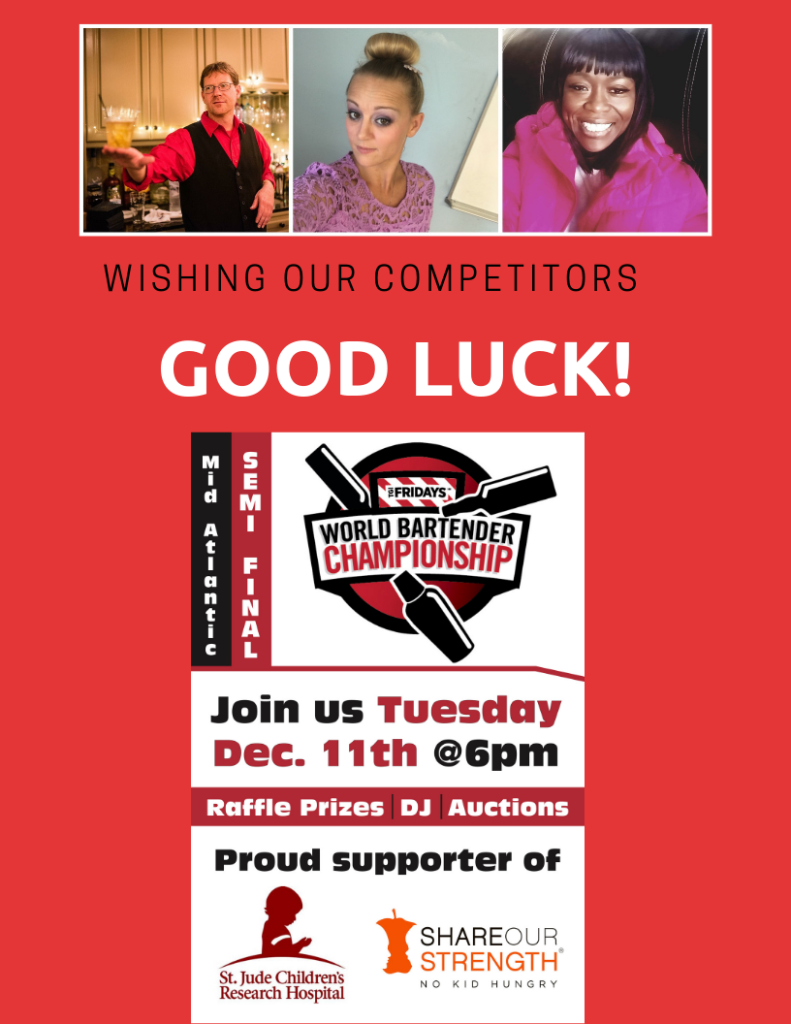 ‘Tis the season to be jolly… and from our family at United Restaurant Group to yours- Happy Holidays everyone! We wish you all a wonderful season with friends, family and loved ones.

SELECT ITEMS ONLY. LIMITED TIME ONLY.

Thanks to Monster Coupon Book, three of our TGI Fridays stores in South Carolina are sharing some favorite summertime dishes & drinks of 2018…