Our amazing team at Midlothian, VA did a fantastic job raising money for Autism Society of Central Virginia, during their 3rd Annual Flair Show in April of this year.

We are so proud and honored. Great job team! 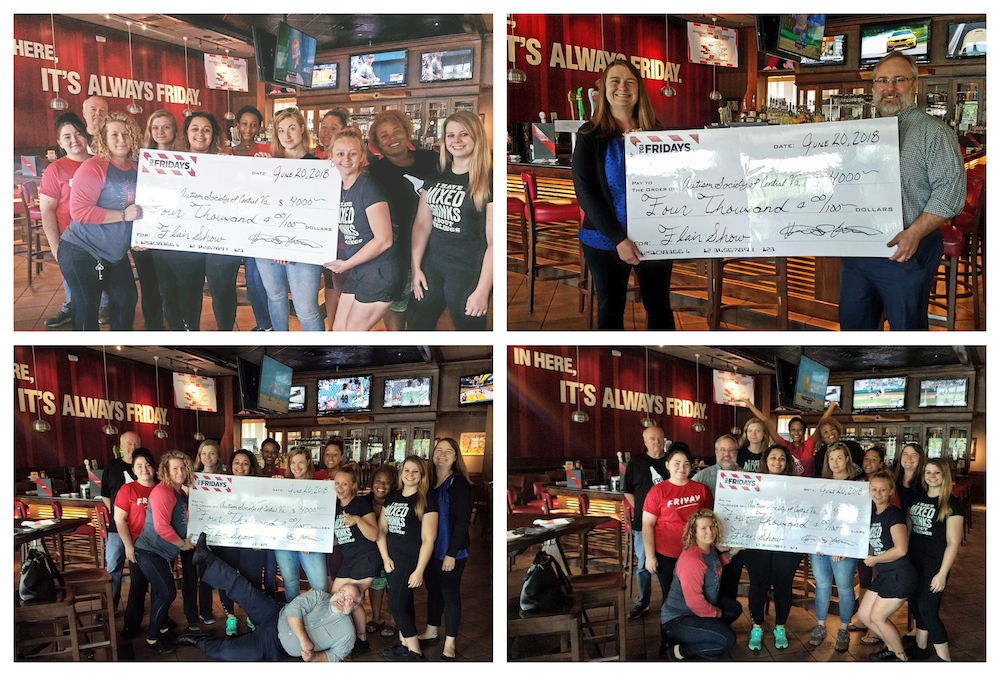 We’re SO thrilled to help sponsor this year’s Special Olympics Summer Games, coming up on June 8th and 9th at the University of Richmond. And this year they’re celebrating their 50th year!

Join us at the opening ceremony on June 8th at 7:30pm…. did we mention there’s going to be fireworks?!

Fridays is raising the bar with Big Ribs, announcing the popular return of the $12.99 offer for a full-rack of Big Ribs in any of 3 savory styles (including two sides).

Would you choose big ribs or tiny ribs? Check out what people on the streets were saying…

We would like to congratulate Melissa Scott, the kitchen manager at our TGI Fridays in Asheville, NC on a job well done!

“One of our Kitchen managers received a bit of special recognition that I wanted to share with everyone. Duncan Davis, SVPO with Fridays was visiting the Asheville, NC restaurant a few weeks ago and recognized Melissa Scott with a very cool letter after his visit to the restaurant.

We could not be prouder of what she and her B.O.H. team accomplish on a weekly basis. No matter the metric we look at (Brand Standards, Eco-Sure Food Safety, Theoretical Food Cost, Budgeted Labor, etc.). She and her team continue to knock it out of the park. Congratulations Melissa!” – Louis Quartochi, Vice President of United Restaurant Group

Congratulations to Casie Ward on making Manager of the Month!

Casie Ward is the general manager at our TGI Fridays in Lynchburg, Virginia. We are so proud to have honored her as Manager of the Month for March 2018!

Below are some shout-outs to Casie. We appreciate all her hard work and dedication and we applaud her for all her many achievements!

“I would like to nominate Casie Ward for Manager of the Month. We have had our times with Management here at TGIF Lynchburg and Casie has always stepped up to the plate and takes on the GM role with pride and always keep us going strong. She holds her team together in any storm. We just received a 94 score with our brand standards and a 99 in food safety, She is dedicated to making sure every shift runs as a family.”
– Sophia Miller, Service Manager at TGI Fridays Lynchburg

“After a solid restaurant walkthrough with her (Restaurant looked great), I was able to present her with all of the goodies that go along with being selected as ‘Manager of the Month’. Congratulations Casie on this well-deserved recognition!”
– Louis Quartochi, Vice President at United Restaurant Group 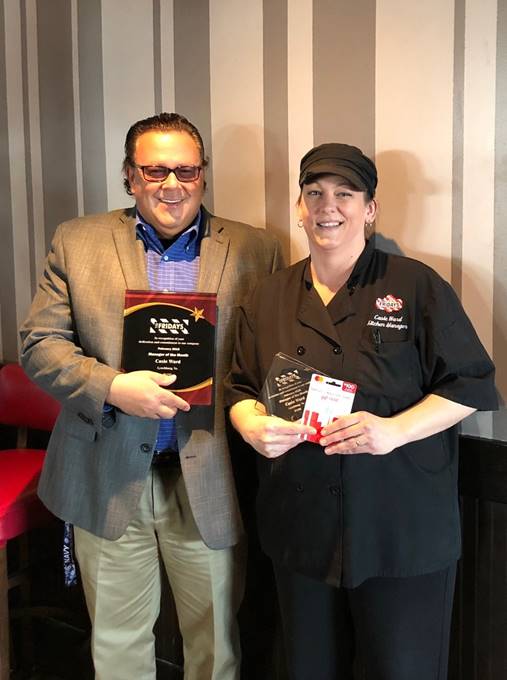 The Beyond Meat Burger at TGI Fridays

The Beyond Meat Burger is now available on the TGI Fridays menu… and has certainly sparked up some conversation around the nation!

This burger patty is both 100% plant-based and 100% vegan. The addition of this “revolutionary” burger patty is also the fastest test-to-table launch in TGI Fridays’ history.

The Beyond Meat Burger not only benefits vegetarians and vegans, but it also appeals to heartier and more health-conscious appetites.

From us at United Restaurant Group/TGI Fridays, we wish you & your loved ones a fantastic holiday season!

We’re so proud that our amazing Big Ribs promotion was featured on ABC’s The Chew!

Thank You to All Our Hard-Working Team Members!

As we enter into the busy holiday season we would like to thank all our team members for a successful year so far and recognize a few for going above and beyond in their duties. These standout managers have proven to be positive role models to their colleagues and key members of our Fridays team.

Our February Manager of the Month, Danny has awesome results! He’s very committed and very hardworking. In February, he put on/hosted the VA M.I. meeting that blew his Director of Operations Mark away. Mark commented “better and more thorough than ANY I have ever seen including the ones the pros in Dallas host”.

Danny is indeed a model for what we are looking for in our managers and we are so honored to have him as a member of United Restaurant Group Family!

Kim earned our April Manager of The Month award when she jumped in to single-handedly manage an Ecosure audit, MI and brand standards audit, while her GM was hospitalized.

“Kim took the reins and passed the Ecosure audit. Then she attacked the MI which normally she and I split BOH/FOH respectively. She took it upon herself to make sure the entire team was focused on being the best they could for it. Lastly, she took the initiative for pushing us on the Brand Standards Audit, which we passed.” – Matthew Finley, General Manager

Manager of the Month for July, she has proven herself a true asset to our company and her coworkers.

“After losing two managers at pivotal weekends, Lissa opened her availability and stepped up into a 5 day a week associate manager role, forgoing the “summer tip money” that one could make on the floor. She has been a positive force through adversity and has taken on added responsibilities to take some pressure off others.  She was the only manager on duty while scoring an 85 on our brand standards review. Lissa has also learned to write accurate orders and has reinstated the successful adopt-a-booth program without being prompted.  She has been an overall asset to our team and our ability to navigate this summer season.” – Dave Porto, General Manager

The August Manager of the Month went to Sean Steffen for being consistently at the top of his game in all aspects of his job.

“Sean has been the backbone of both our BOH performance and overall performance as a team.  He’s been one of the top performers in almost every measurable category in our market, and the company.  He has consistently put up an AVT that is not only below our company goal of 1%, but often below 0.5%. Additionally, he has been the market leader in lunch throughput times, that has sparked a competitive push that’s driving our group throughput down as a whole, plus driving our ops comps down to a near best in class number.  He gives 100% of his energy to making the restaurant a better place to be as a manager, guest, and employee. He allows me to feel confident that my store is being managed with integrity, care, intensity, and with a purpose in my absence. I could not ask for more out of a kitchen manager.” – Dathen Compton, General Manager

Congratulations to Melissa on being selected as United Restaurant Group’s November 2017 manager of the month.

“Melissa has always done an amazing job for us, but this week she really went above and beyond. On a very busy weekend, she not only ran the kitchen and crew flawlessly but also catered an event for the Southeastern Corvette Club at the new Hampton Inn of Biltmore Village. This added close to an extra $1000 in sales. The most exciting part to this is the Hotel was very impressed with the presentation and efficiency of the event. This could be the beginning of a great source of extra revenue for the store seeing they do not have an in-house caterer. Besides the event this month she was ahead of the sales with labor, food ordering, rib prep (never ran out) and low-ticket times and comps.”– Jake Kirchner, General Manager

Congratulations to Brandi for being selected as United Restaurant Groups manager of the month for December 2017.

” As a team Leader, Brandi has blown me away with her skill set and ability to inspire all departments. Her passion for the Guest Experience is evident in her energy and enthusiasm when coming in for her shifts. She leads by example, constantly circling, coaching, praising, and recognizing excellent behaviors and jobs well done, as well as standing as the Steel Pole for our standards. Brandie is the type of leader that has that empathetic ability to make you want to do your very best at your job because every guest is her guest and every plate is her plate! Recently, she was the MOD when we scored above 90 on our Brand Standards and Eco Sure audit and her very first response was to congratulate the team on an excellent job and give out rewards and recognition to the Super Stars. Brandie is a sales guru and our restaurant is showing growth in profit despite hard economic times for our local area. As well as leading us to Gold Zone on our Restaurant Score Card! She orchestrated the Stuff the Bus event for Tidewater TGI Fridays to Give Back to the community and to present Fridays to a broader expanse of prospective guests! She was personally involved both of our days to man the TGI Fridays booth, the first to show up and the last to leave!
She is the backbone of our restaurant and our team. I’m proud of her, to see the bartender that defied gravity and has become a powerhouse leader! Please consider recognizing her excellence as Manager of the Month!” – Jenn Finch

Thank you to all our dedicated employees and valued guests that help make TGI Fridays and United Restaurant Group an everyday success.

We wanted to wish a happy belated birthday to Ian MacIntyre!

Ian emailed our Greensboro location requesting a “Happy Birthday” song. Here’s to you, Ian! Thanks for being a fan of Fridays….